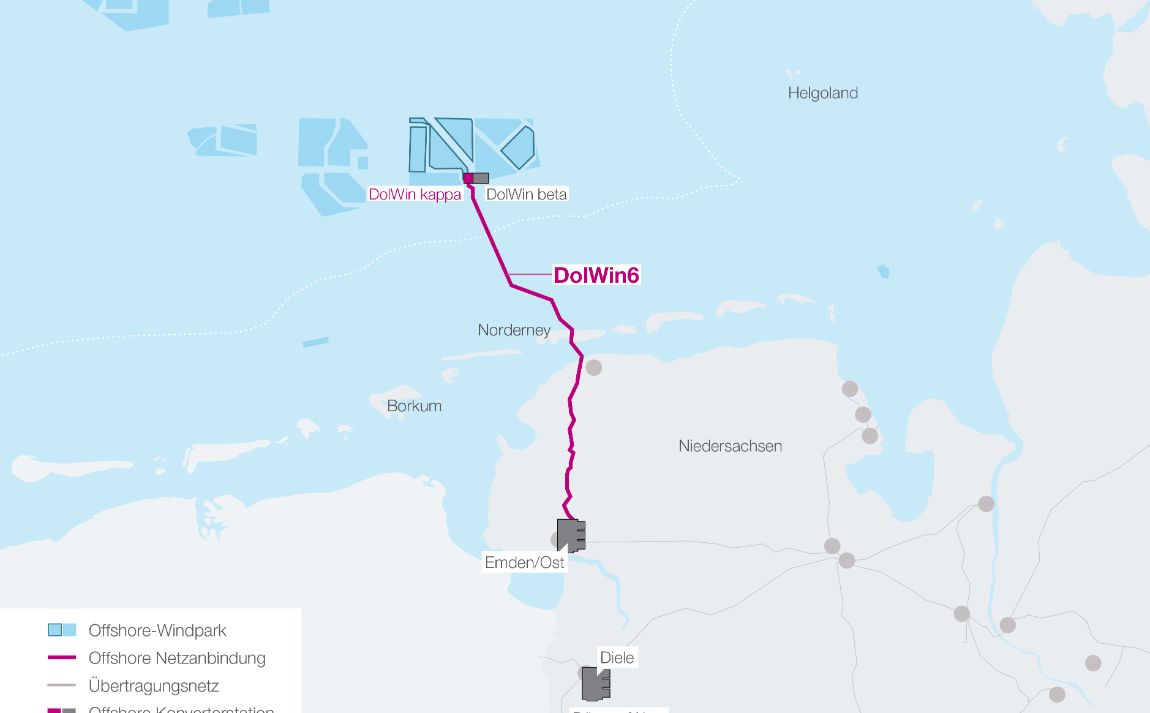 Major order: Two 90-km-long high-voltage direct-current cables from Nexans will transport up to 900 MW of wind power from North Sea Cluster 3 to the Emden/Ost converter station

Paris La Défense, July 17 2017 – In July 2017, transmission system operator TenneT awarded Nexans the contract to supply and install the cables for the DolWin6 direct-current link. These cables will transport the electricity from the offshore wind farms of North Sea Cluster 3 from the DolWin Kappa HVDC converter station to the Emden/Ost onshore HVDC converter and transformer station. Two parallel, XLPE-insulated 320 kV DC cables, each measuring 90 km in length, will be able to carry a maximum output of 900 MW. The Nexans contract, worth around 100 million euros, comprises the cables, accessories and installation. In addition to the DC cables, Nexans will be installing a fibre-optic cable for data transfer. The project – Nexans Deutschland’s biggest to date – is scheduled for completion in 2023. “We are delighted to be working alongside Nexans, another strong service provider in the field of plastic-insulated direct-current cables for our latest offshore project,” said Lex Hartman, who sits on the Executive Board of TenneT.

Efficient electricity transmission and careful installation in the Wadden Sea

The geographical location of the offshore wind farm to be connected means that the offshore grid connections runvia the ecologically sensitive Wadden Sea. This is also the case with the DolWin6. On the way from the DolWin Kappa converter station, where the three-phase current generated at sea is converted to direct current, to Hilgenriedersiel on the mainland, around 45 kilometres away, the cables will cross the island of Norderney. To help protect the Wadden Sea and the flora and fauna on Norderney, horizontal drilling will enable the cables to pass under the island. TenneT is beginning work on this part of the project this year, as in order for the dykes and natural features to be protected, it can be carried out only between mid-July and the end of September Nexans will also install the cables carefully and within suitable time frames. The submarine cables, manufactured in Norway, are scheduled for delivery and installation in summer 2020 and 2021. Installation of the land cables, produced in Belgium, between Hilgenriedersiel and Emden – a distance of roughly 45 kilometres – is planned to take place from 2020 as well.

Cable technology for the infrastructure of tomorrow

Dr Dirk Steinbrink, Managing Director of Nexans Deutschland and Senior Executive Vice-President of the Nexans Group, commented: “I am delighted that TenneT has awarded us the contract for this important link. With DolWin6, we are responsible for all stages of the project relating to the cable system, including design, manufacture, logistics and installation, and after previous projects such as Beatrice, Italy-Montenegro and NordLink, we once again have the chance to demonstrate our expertise in high-voltage direct-current transmission.” Low-loss high-voltage and ultra-high-voltage cables from Nexans enable grid operators to expand their grids in a way that achieves the best possible results in terms of efficiency and conservation of resources, and thereby to lay the groundwork for the energy supply of the future.