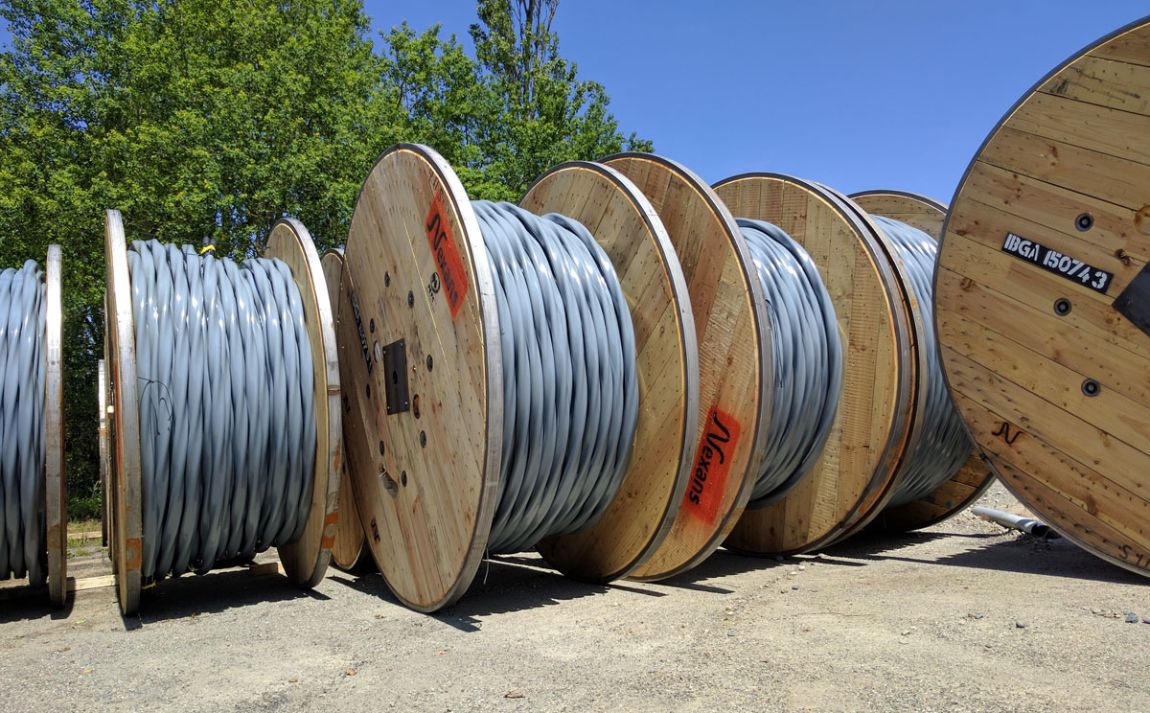 Nexans and ffly4u, the industrial Internet of Things (IoT) specialist, are pioneering a tracking and management service that not only lets DSO customers know the exact location of their drums, it even tells them how much cable is left.

Paris, March 9, 2017 – Returnable cable drums are the unsung workhorse of the cable manufacturing Industry. Typically, they provide years of service in transporting cables from the factory to the customer and storing them on site until they are needed. And when empty they are collected and returned to the factory to begin another cycle. It seems a simple and straightforward process. So just why is Nexans interested in working with ffly4u to connect its cable drums to the Internet of Things (IoT)? The answer lies in the numbers. For example, a DSO (distribution service operator) like France’s Enedis can spend several million Euros a year in renting cable drums. Nexans also incurs major costs in collecting the empty drums and purchasing new ones to replace those lost, stolen or damaged.

It became clear to Nexans that anything that could help improve the tracking and management of its cable drum fleet could offer substantial cost savings as well as enhancing traceability. Therefore, around 18 months ago, Nexans joined forces with ffly4u, the industrial IoT specialist, to carry out a pilot program on the Enedis fleet of 40,000 drums.

ffly4u has proven expertise in both developing wireless sensors together with the communications and  management infrastructure that supports them. The company worked in partnership with Nexans to develop the tiny battery-powered sensor that is key to the tracking project. This sensor is embedded within each of the wooden drums, two or more metres in diameter, used to carry medium voltage (MV) cables for Enedis’ power infrastructure projects. This sensor provides a unique way of identifying both the drum and the type and quantity of cable it is loaded with. It connects wirelessly to a cloud-based management system that provides Nexans and Enedis with real-time information on the drum’s location and its status during a typical 150-day tour of duty on site. Among the information the sensor provides is how much cable has been used and it sends a message when the empty drum is ready for collection.

One of the most important financial benefits offered by the tracking service is that it helps reduce the amount of time that empty drums are left on site waiting for pickup, saving on costs and working capital. The service also lets site operators plan their daily operations more effectively as they can locate the cable drums easily as well as having detailed knowledge of the type and quantity of cable on each drum. In addition, being able to locate the drums on a large operating site makes the collection logistics much more efficient. This also offers a significant environmental benefit as the drums will never be lost or abandoned. Tracking also helps eliminate the risk of cable theft as it raises an alarm if the drum is moved outside its pre-set perimeter or during non-operational times, such as at night.

A further key operational advantage is that the tracking provides total traceability to confirm that the correct cable has been deployed on a project. It also helps manage the residual lengths of cable on drums held on site, facilitating their reassignment on other neighboring sites in order to minimize transport and scrap.

“Our new sensor-based service is taking cable drum fleet tracking and management to the next level, with cost savings of 20 percent easily achievable for MV drums. And if rolled out to high voltage drums that can cost 10 times as much, the potential savings could be huge,” says Olivier Pinto, Nexans Services & Systems Director Europe.

“The concept has already been proved on a project of 100 drums and the next step is to extend it to several thousands. While drums are an immediate objective, the wireless tracking technology could have many other applications for electrical infrastructure such as transformers and generators. This is a very important example of our commitment to extending Nexans’ customer offering beyond supplying cables to providing a complete management service.”

“The internet of Things is now starting to make a major contribution across all aspect of industry. And as this project with Nexans and Enedis shows, smart thinking allied to cloud-based solutions can take even the most basic logistics operation such as cable drum management to the next level. Furthermore, it shows the capacity of ffly4u solutions to create business value and in fine customer value based on Supply Chains data” said Olivier Pages, CEO of ffly4u.