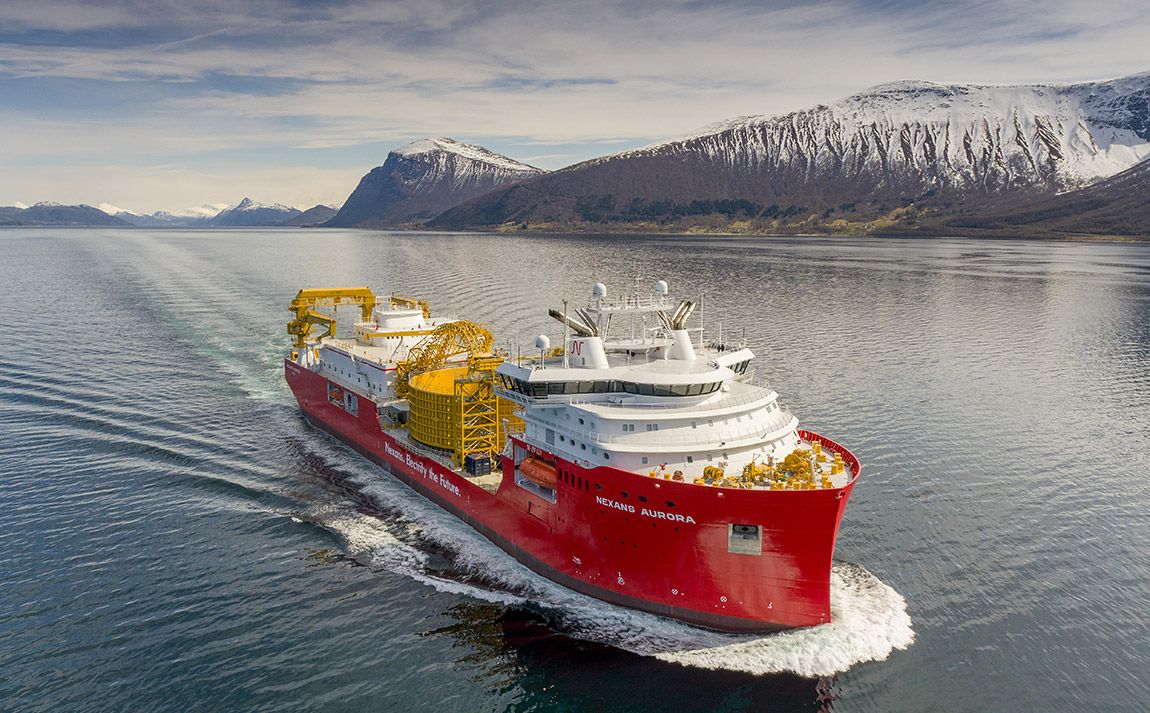 The vessel will strengthen Nexans’s position as a world-leader in the cable-laying sector and play a key role in the world’s journey to Net Zero.

Halden, Norway, 22 September 2021 – Nexans has further strengthened its offering in the offshore wind and interconnector market by today unveiling its second cable-laying vessel, the Nexans Aurora, to customers and stakeholders at a dedicated ceremony in Halden, Norway.

The ceremony saw Nexans CEO Christopher Guérin speak to customers and stakeholders about the role the new vessel will play in helping to meet the fast-growing demand for high voltage subsea cables and interconnectors, as part of the global energy transition.

The Nexans Aurora will be the first of its kind in the offshore cable-laying sector. It’s 75ton special design cable capstan provides the market leading capacity for installation of cables in deep waters of 2,000m and beyond. It has a 10,000ton cable payload capacity. In addition to deep water, the vessel also has excellent shallow water capabilities to get close to shore for cable landing operations.

Furthermore, it’s one of the few cable-laying vessels in the world that can also support the installation of interconnectors. Interconnectors are critical infrastructure for strengthening the world’s power grid and improve energy supply and security by enabling better energy trading between countries.

Christopher Guérin, CEO of Nexans, said: “With global electricity demand expected to grow by 20% by 2030, the vessel will provide crucial infrastructure on our journey to net zero and full electrification. Not only will it help bolster renewable energy supply by laying high voltage subsea cables for offshore wind, the vessel will also help strengthen and modernize the energy grid through the installation of interconnectors. The new vessel embodies Nexans’ strategy to electrify the future and we look forward to continue working closely with partners as, together, we drive the global energy transition.”

To date, Nexans has invested more than €500M in the offshore wind sector and continues to expand its offshore wind operations around the globe. It already owns one purpose-built cable laying vessel, Nexans Skagerrak, and the Nexans Aurora will bring additional capabilities and capacity to the next level.

Nexans is also involved in interconnector projects such as a project with ADMIE that will provide a one gigawatt (GW) link between the island Crete and Greece's mainland network.

For over a century, Nexans’ global mission has been to electrify the world, from energy generation and transition to distribution and usage, the solutions Nexans manufacture and install cover the full electrification value chain. The Nexans Aurora strengthens Nexans role as a global a leader in the design and manufacturing of cable systems and services.