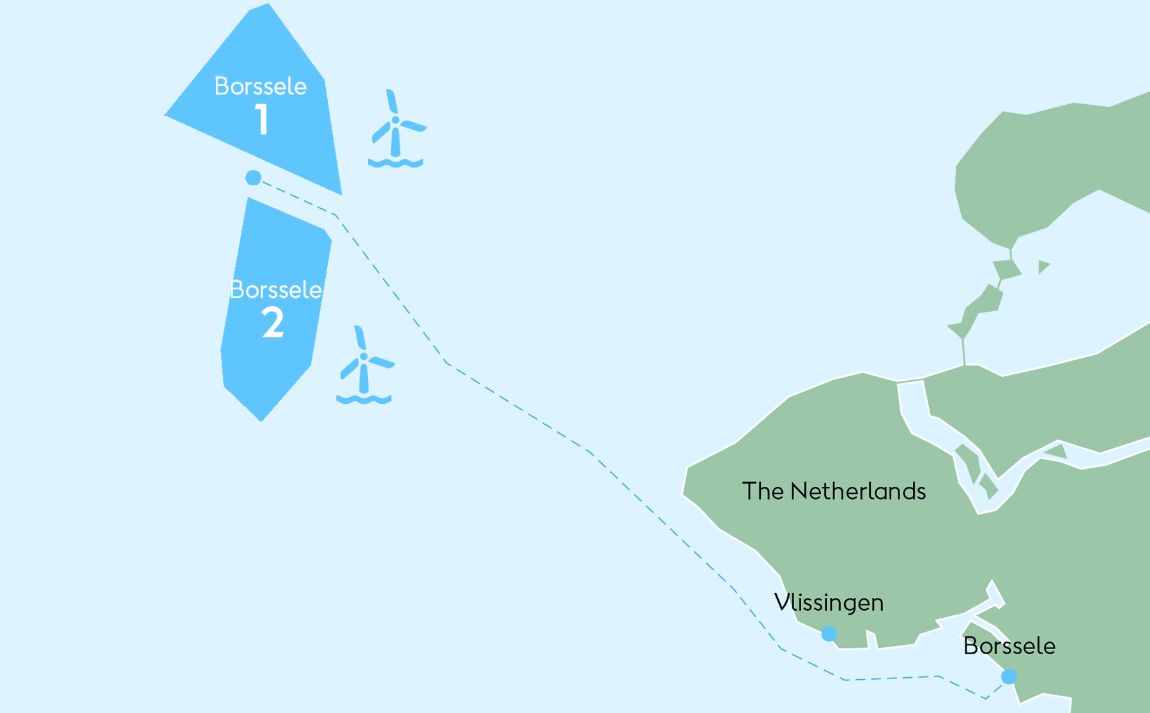 Major contract for 66 kV submarine inter-array cable with associated accessories is the first to be placed under a new five-year framework agreement recently signed by Nexans and Ørsted.

Paris La Défense, November 7, 2018 –The Netherlands is planning to increase its use of renewable energy to represent 14% of its energy mix in 2020 and 16% in 2023. Offshore wind energy is a vital element in this transition and a major milestone will be reached in 2020 when Ørsted brings its Borssele 1 and 2 wind farms online. Nexans is playing a key role in the project by supplying a total length of between 170 km and 190 km of subsea cable rated at a maximum operating voltage of 72.5 kilovolt (kV) to provide the inter-array connections between the turbines and the offshore substations in the framework of a multimillion-euro contract.

Borssele 1 and 2 are located around 23 km off the Dutch coast in 14 to 36 meters of water. Together, the two wind farms will have a total of 94 wind turbines generating 752 megawatt (MW) of power, which is enough electricity to meet the needs of around one million domestic households.

As part of a new five-year framework agreement, Nexans has been awarded a contract by Ørsted to supply and install three-phase 66 kV copper cables with two cross-sections. They will be used for internal cabling of the wind farms: the array cables connect the wind turbines to each other and to the transformer stations where the electricity is transported to the mainland.

In addition to the inter-array cables, Nexans is also providing the relevant fittings and accessories for the project, including T-connectors for the 66 kV cables designed for wind farm application with a standardised, robust and easy plug and screw solution.

“ The Borssele wind farms will be the first time that Ørsted has used Nexans new 66 kV cables for its offshore wind farms. Operating at this increased voltage will result in lower losses than using array cabling at the normal 33 kV and 36 kV voltage level. Nexans is proud to be the world's only supplier that is currently able to equip this new generation of wind parks with a complete in-house portfolio of state-of-the-art cables and standardised connection solutions suitable for a maximum operating voltage of 72.5 kV. ”

Nexans has previously supplied Ørsted (formerly Dong Energy) with submarine cables for a number of offshore wind farms. Furthermore, Nexans’ portfolio of cutting-edge accessories is already connecting the three of the world’s first 66 kV wind farm pilot projects commissioned in the North Sea over the past two years.

The array cables for Borssele 1 and 2 will be produced at the Nexans Germany plant in Hanover for delivery in 2019. After they have been laid in place on the seabed, Nexans Subsea and Land Systems will complete connection to the turbine bases using in-house jointing expertise in 2020. The cable accessories will be supplied by Nexans Euromold facility based in Erembodegem, Belgium.

pdf - 235.9 kB
Nexans is awarded a multimillion-euro contract for Ørsted’s Borssele 1 and 2 wind farms off the Netherlands coast
Download