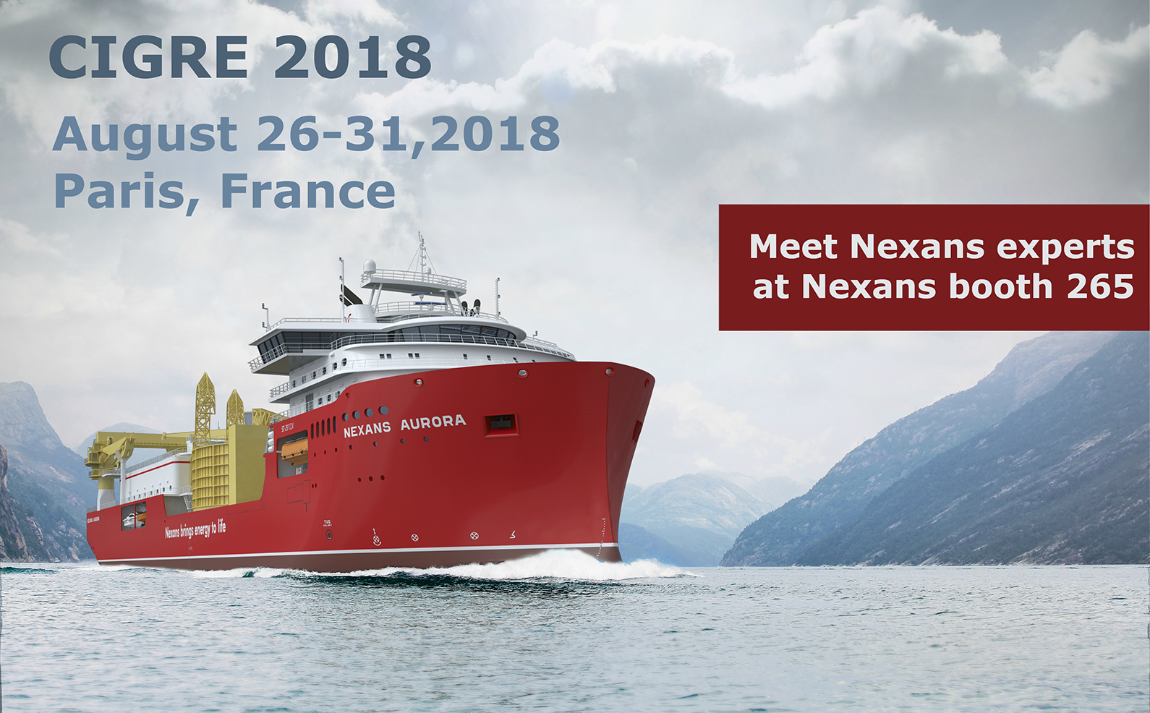 Paris La Défénse, August 24, 2018 – As the world’s energy transmission needs continue to increase, a new generation of increasingly high performance and efficient power systems will be critical to keep up with the trend. For almost a century, CIGRE, the world’s leading forum for power systems, has been gathering experts together to share their knowledge and join forces to improve the electric power systems of today and tomorrow. At the 2018 Session of CIGRE, Nexans will showcase its cutting-edge turnkey cabling systems for energy projects and will present the latest findings of the R&D projects in the framework of the event’s Study Committees and Working Groups.

For decades, Nexans has been an active member of the CIGRE Technical Council, Study Committees (SC) and Working Groups (WG), contributing its know-how in the field of insulated cables. This year, Nexans’ renowned experts are presenting technical papers on the future of networks, with the focus on armour loss in three-core submarine cables and electromagnetic interference in parallel HVDC cable circuits. In addition, Nexans will also be hosting a Lunch & Learn private seminar to present the latest innovations in HV transmissions.

As a turnkey partner for energy projects of any size and complexity, Nexans will be showcasing its complete offer of products and services for land and submarine transmission systems. This includes cutting-edge HVDC and HVAC solutions and associated services and HV accessories. In addition to overhead lines and land cable systems, Nexans will present its submarine cable solutions, including subsea interconnectors, inter-array cabling up to 66 kV, export cables for offshore and floating wind farms as well as power connections for oil and gas facilities.

Furthermore, CIGRE visitors will have a chance to know more about Nexans Aurora, the Group’s new cable laying vessel with a 10,000-ton capacity turntable. Nexans Aurora will play a vital role in installation of Nexans’ cutting-edge HV submarine cables that will bring more energy to the world, helping connect offshore wind farms to the grid, supporting electrification of offshore petroleum installations and creating interconnectors between countries.

Nexans will also showcase its thought leadership in the field of superconducting systems, presenting superconducting cable solutions for MV and HV grid as well as the sample of a 320 kV DC cable. This is the world’s first high-voltage superconducting cable system capable of operating in direct current, designed in the framework of the EC-funded Best Paths Demo 5 workshop led by Nexans. The Group has manufactured the components for the prototype set-up, which is currently being installed in Nexans HV laboratory in Hanover, Germany. The first tests of the prototype are scheduled to take place later this year.

Finally, the visitors of the CIGRE 2018 will have a chance to learn more about Nexans Recycling Services that allow the customers to monetize their leftover cables while minimizing their environmental impact.