Nexans rewarded for its commitment to sustainable development 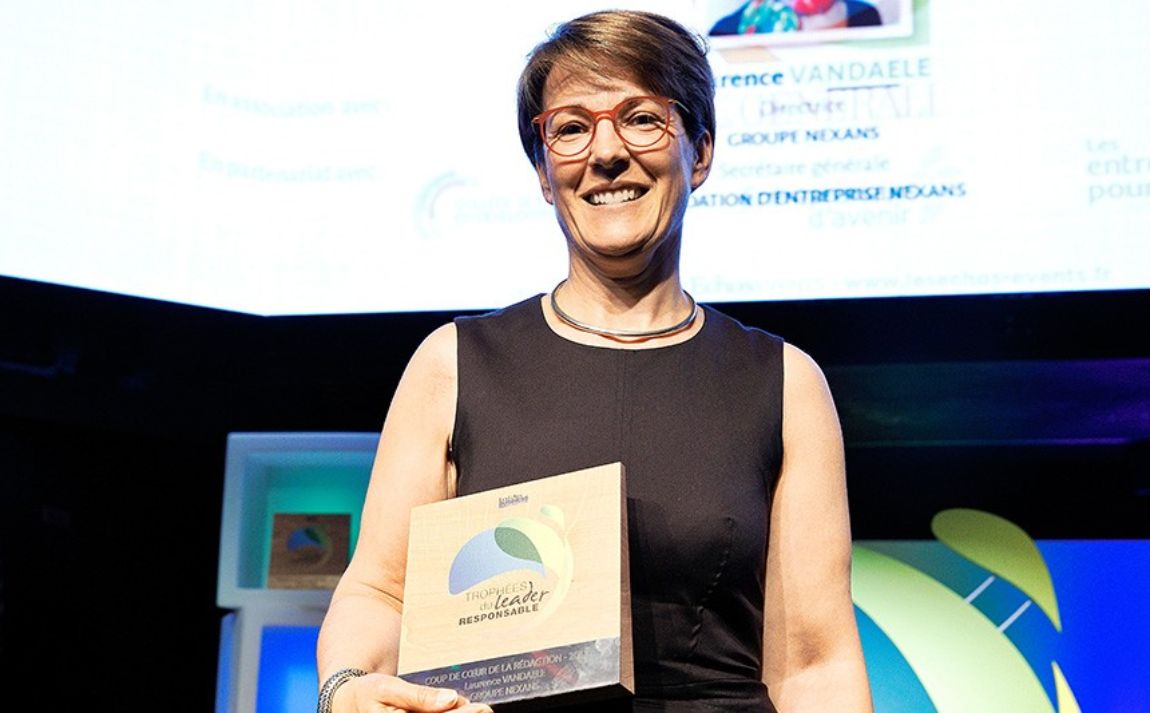 In case you missed the news, earlier this summer, Laurence Vandaele, Nexans CSR Director, was named one of the seven winners of Les Echos Business’ Trophies of the responsible leader chosen by the outlet’s editorial board and a committee of experts. This prize is awarded in recognition for the contribution of professionals in sustainable development through activities and projects carried out within their companies and associations. Laurence Vandaele, who also leads a working group at the College of Directors of Sustainable Development (C3D), was awarded the "Editor’s Choice" award for her involvement in the Group's CSR strategy and her commitment to the Nexans Foundation, where she holds the position of General Secretary.

Nexans’ CSR commitments in the spotlight

Laurence Vandaele is actively involved in definition and implementation of Nexans' CSR strategy. The Group has deployed strict standards to control its environmental impacts, notably in terms of energy consumption, water, raw materials, pollution risks and waste management. Acting for energy transition, the Group is driving the shift to renewable energies both alongside its customers and within its own plants in addition to implementing circular economy practices, such as eco-design, recycling of materials, and waste management of packaging. Together with operational, sales and financial teams, Laurence is working on reconciling economic and environmental performance.

In parallel, Laurence oversees the activities of the Nexans Foundation as the organization’s General Secretary. Through its Foundation, Nexans supports projects aimed at fighting against global energy insecurity and poverty by focusing on collaboration with grassroots associations and sustainable solutions. Some of the recent projects supported by the Nexans Foundation feature the electrification of the Gamégblé school in Togo in Western Africa, the deployment of electrically autonomous scientific libraries in Madagascar, as well as the installation of a photovoltaic system to give light and electrical energy to a hospital in Zagher, Eritrea, only to name a few. The aim is to enable disadvantaged populations to access essential services that will ensure their individual, social and economic development.

It is thus the Group's strong commitment to the sustainable development and corporate social responsibility as well as Laurence Vandaele’s personal contribution that were recognized by Les Echos Business’ "Editor’s Choice" award.

For Laurence Vandaele, the involvement of the leadership teams in sustainable development is a key factor for success of a company’s CSR strategy. This is certainly the case at Nexans, where CSR is considered by all the management, including the Board of Directors, which demonstrates the importance of the subject, both internally and externally.

"Today, sustainable development is neither a constraint nor an option, but it is an undeniable source of value creation for a company," commented Laurence Vandaele at the awards ceremony last June. "At Nexans, CSR is a cross-functional matter in which all employees and support functions are deeply involved. Our common goal is to contribute to building and feeding a greener, more sustainable and fairer world through our daily activity and cabling solutions. "